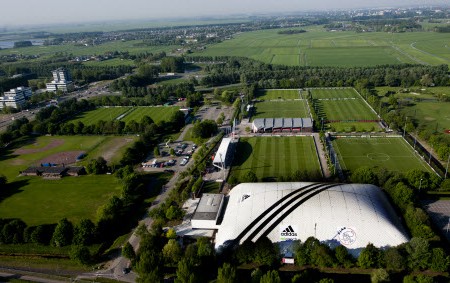 Description
On Friday, April 29, 2011, the sports dome on the sports park ”De Toekomst” has been inaugurated officially for the A-and youth selection of Ajax. At the training complex of Ajax, next to the arena, Poly-Ned placed a brand new dome with huge dimensions (76 x 120 meters).

This hall is part of the Adidas miCoach Performance Centre and is the venue for a special collaboration between Ajax  and the Vrije Universiteit Amsterdam in motion analysis. On  the roof of the dome has been installed an unique video system, a  so called player tracking system. This system makes it possible to analyze  speeds and distances of dribbling, shooting heads.

Obviously, these inflatable structures are available with different logos and / or stripes